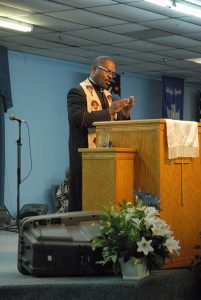 Although he loved Christ from a young age and knew instinctively that he wanted to serve Him for the rest of his life, it was not until 1991 that Lance Davis received a call to Christian ministry. He began his vocation by serving faithfully under the leadership of the Rev. Craig Melvin Smith at Metropolitan Missionary in Chicago, then under Bishop Henry M. Williamson at Carter Temple C.M.E. Church, also in Chicago. In 1994, Lance Davis was assigned by Bishop Doty I. Isom to serve as pastor of the J. Claude Allen CME Church (JCA) in Dixmoor, Illinois. He began his pastorate with a small congregation of 45 active members and an annual operating budget of $35,000.

It soon became evident that God had greater plans for J. Claude Allen CME. During Bishop Davis’s tenure, the membership grew to nearly 1,000 members with an annual operating budget of half a million dollars. Many attributed the enormous growth to the JCA ministry achieved to Bishop Davis’s unwavering love and commitment to God, coupled with natural business acumen — he was the product of two entrepreneurial parents.

From the Desk of Bishop Davis

Twelve Covenant pastors were asked by the Central Conference of the Evangelical Covenant Church (ECC) to present a Bible study to the students at North Park Theological Seminary. Following is the teaching of Bishop Davis.

Part 10: We are a justice-seeking conference.

He has shown you, O man, what is good; And what does The Lord require of you. (Micah 6:8)I, therefore, the prisoner of The Lord, beseech you to walk worthy of the calling with which you were called, with all lowliness and gentleness, with longsuffering, bearing with one another in love, endeavoring to keep the unity of the Spirit in the bond of peace but to do justly, to love mercy and to walk humbly with your God? (Ephesians 4:1-3)

In November of 1884, C. A. Björk wrote a letter that could be classified as the inaugural letter of the Covenant Church. Björk sought to settle the dispute between the Mission and Ansgar Synods which centered on the subject of denominationalism. On the one hand, the Mission Friends wanted to establish a denominational Covenant and on the other hand, the Ansgar Mission repudiated the idea of establishing a denomination. In his argument for establishing a denomination, Björk insisted, “Taking such a step [the organization of a Covenant] will without doubt be pleasing to God and conduce to His glory, further His kingdom, and confound the enemies who now rejoice in the division which exists in the work.” (Karl Olsson, By One Spirit,   pg. 288)

Björk’s argument for a denomination was not simply for the glory of God, but it was also to bring unity among the pastors who clung vehemently to opposing ideals. Perhaps, it can be said that at the very beginning of the establishment of the ECC that Ephesians 4:3 resonated with Björk and the other Mission Friends in that they endeavored to “keep the unity of the Spirit in the bond of peace.” They desired to establish a unified community (or Covenant) that would weather the storms of opposing views because such a course would ultimately glorify God.

As we fast forward to the present, there are still many disputes that seek to divide the Christian Church. Today, however, the Church appears to be split over their varying opinions concerning social, political or economic issues. Chasms within the postmodern Church are now caused by issues of justice and not necessarily Church discipline or doctrine. Civil rights, women’s rights, voting rights and rights of personal choice are not only being argued within courtrooms and boardrooms, but also in many denominational conferences and ecumenical circles. All too often, the mere discussion of the issues has been a cause for fall-out among Believers. Many churches and denominations have been chided and criticized for taking one position over another. The potential fallout from simply discussing issues of rights and justice has caused many churches and denominations to clamp-down and refuse to discuss certain issues of justice at all. However, avoiding the issues all too often create division within the church as well.

Unlike many Christian denominations, the Evangelical Covenant Church has taken a different approach towards addressing issues of justice by making it one of its Mission Priorities; Love Mercy, Do Justice. While our approach is different, it’s not new. As Björk and the Mission Friends sought unity within diversity in the early days of the Covenant, so do we today. The ECC seeks to expose and explore the issues of justice as a means to do justice. Doing justice means that we must expose injustices such as mass incarceration, human trafficking, and immigration. Exposing the injustices that plague our society informs the Christian practices of Covenant congregations and the communities that we serve. Once our communities are adequately informed of the challenges we face, then collectively we can explore ways to eradicate or at least minimize the effects of the injustices.

Not only are we a Covenant that resolves to do justice, but as an intentionally multi-ethnic Covenant, we seek to do justice together. As Björk desired, we too desire to “keep the unity of the Spirit in the bond of peace” by working together to make life better for the communities we serve with everyone at the table. We in the Central Conference aim to do our part in this collective justice-seeking work by maintaining a functional and relevant multiethnic Compassion, Mercy and Justice Commission. As a commission, the Central Conference CMJ exposes and explores societal injustices and seeks God’s will in redressing the challenges of our world. As individuals, when we try to discuss the injustices within our ministry contexts, we help the world to see the problem; but when we seek and do justice together, we show the world the power of our God. In the ECC we’ve learned that “If you want to go fast, go alone; but if you want to go far, go together.” The Central Conference: Doing Justice Together.